Issues of discipline have been on my mind lately - I have 22 month old twins! The conclusion for me is that toddlers need the first two forms of discipline: practice of good behaviour and penalties for misbehaviour. (Hopefully more practices than penalties). Part of developing good habits is to learn moderation and I've asked Kristin, a fellow multiples mama to share. I hope you enjoy the story she's sharing as much as I do
*     *     *
Teaching our Kids Moderation by Example

The shears are close to his ears and I can see his chin start to quiver. He looks at me like, "Don't do it mom. Don't let this lady cut my ears off. I'm so young. Save me." The woman in her apron looks at me as he screams and throws his head forward and back and says, "I can't cut his hair unless he calms down. Can I give him a sucker?" I look at him, crying and clearly being scarred as we speak. We have a family gathering! He can't go looking like Cousin It. I look at my two girls, at my feet, on the verge of pulling down the whole dvd rack or even worse, making a run for it.

It was like the record stopped and the spotlight was on me. It is one of those mothering moments of truth. What choice will she make? Stick to her guns about no candy this young or give in and get the dang haircut...and give him the dumb dum-dum?

Well, let's just say, he got a hair cut and kept both of his ears. The girls watched the trimming episode with no attempts to escape. All was right in the world for eight minutes. And all was even alright after the eight minutes...the eight minutes of sticky sucking, licking and eventually chewing of those little suckers. No one turned into a pumpkin, my parenting license was not revoked and they have never even once uttered the word, or a resemblance to, suckers. 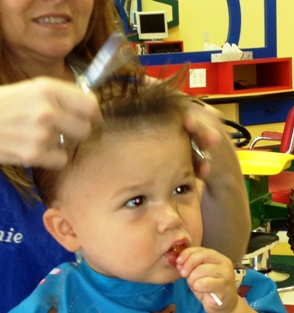 They had a sucker at nineteen months and it wasn't so bad.

I still struggle with giving my kids items like animal crackers, cookies, cupcakes or candy because I know there is NO nutritional value in those cavity inducing items. It kills me because it seems like just yesterday they were tiny, innocent and un-touched by the world of sugar and filth...happily sucking away at their bottle and pleased with the occasional spoonful of sweet potato mash.

But they are kids. They aren't little versions of me that I get to give a chance of "doing that sweet tooth over." They are wide eyed, happy and curious little people that deserve to know the joy of food and the occasional thrill of a treat. Some of my favorite childhood memories are of my dad stirring my ice cream until it was so smooth it was like pudding. Or when my Grandpa would get out his fresh strawberries, covered in sugar like a winter snow frosting. And let us not forget summer push pops or cupcakes at birthday parties.

My job as the mom is to not say "NO!!" in haste to every sucker or cupcake that comes my child's way, but to let them enjoy, and then follow up with the gentle reminder that this a treat - one to be savored and celebrated. I hope to teach my kids not only moderation, but the proper way to enjoy desserts here and there, rather than expect them every time a plate is clean. I also hope to introduce "senseless" choices once in awhile, teaching them that part of the joy of life is indulging and savoring in delicious foods, just because they taste good...especially when shared with others!

My job is also to lead by example...so when that afternoon opens up and we are right next to a cupcake shop - I will go in, have a rare cupcake and make a special memory with my children. I don't have to always pass on the cupcake that makes me think twice about fitting in my favorite jeans. Together, we can indulge in a lazy afternoon over a sugary, dense cake and whipped layered frosting. However, my bet is the craving of a chocolate cupcake will come and go, while the laughs and mess we shared together over an occasional finger licking good time will linger forever.

Do you lead by example with moderation?
Be nourished,
Kristin Hackman

Kristin Hackman
Kristin is the author and founder of justbreathemama.com - a website promoting health and emotional balance amidst the chaos and demands of motherhood. She speaks from the heart, as she tries to figure it all out while raising her toddler triplets, staying sane and savoring the gift of marriage to her husband of five years. Together they live in Indianapolis, Indiana.


Thank you for reading;

As an Amazon Associate I earn from qualifying purchases.
Thank you.

Get Updates Emailed to You